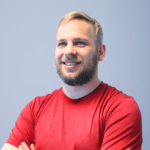 This year’s Cloud Foundry Summit Europe was held in Basel, Switzerland. As a company which strongly embraces the cloud, we could simply not miss it! Throughout the event, all visitors to our Silver Sponsor booth no. 15 could not only discuss all things cloud-native, but also drink a cup of our delicious, freshly brewed vanilla coffee. First, lets take a look at some numbers from the event. There were:

However, coffee wasn’t the only reason we traveled over 1000 kilometers. What mattered to us was the impressive conference line-up. We were hungry for the upcoming tech news, to see what’s trending and, of course, to learn new things. By the very looks of the schedule we could tell that the European edition in Basel was slightly different from the Boston edition earlier this year.

Let’s focus first on serverless. This topic has either been exhausted or has only been a temporary fling among the international circles. Why? Because this year’s edition has only devoted two speeches in the Containers and Serverless track to FaaS. Whereas, 6 months ago in Boston the number of speeches about it was twice as big. One more reason for that might be the growing popularity of Kubernetes. There were 6 tracks and, apart from Contrainers and Serverless, each had at least one speech about K8S/containers.

Currently, the interest in Kubernetes is so palpable and obvious that even Cloud Foundry themselves confirmed it by announcing a CF Containerization project:

Finally, it’s worth mentioning the second project approved by Cloud Foundry – Eirini – which brings the CF closer to K8S and enables using Kubernetes as a container scheduler in the Cloud Foundry Application Runtime. It means nothing else but the fact that we are getting closer to KubeFoundry or CloudFubernetes – platforms from platforms.

During the Summit, one of the most important moments for us was the announcement of our new product, Cloudboostr, an Open Cloud Platform which is a complete cloud-native software stack that integrates open-source technologies like Cloud Foundry and Kubernetes. Thanks to Cloudboostr, companies can build, test, deploy and operate any workload on public, private or hybrid cloud.