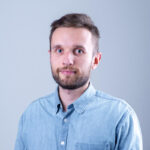 Automation helps with all the mundane and error-prone tasks that developers need to do on a daily basis. It also saves a lot of time. For automating iOS beta deployment, a very popular tool is Fastlane. The tools automate entire iOS CI/CD pipelines and allow us to keep an iOS infrastructure as code. Today I will share my observations and tips regarding setting up fastlane for iOS project.

Jenkins is an open-source automation server, but you can use fastlane on your local machine too. However, a separate build server can certainly help you create a more streamlined process.

The Jenkins installation process is pretty straightforward, so I will not be going into details here. But there are some quirks that we should take into consideration.

To elevate the problem with detached HEAD, we should provide Branch Specifier with „origin” e.g. „origin/master” and choose the option Check out to specific local branch with branch name including **. For more details, see the Jenkins’ help.

All the tool commands should be put in the Execute shell phase.

Fastlane is used to simplify deployment of iOS and Android apps. It is well documented and its community always tries to help in case of any bugs etc. We can install it using Homebrew or RubyGems and I personally recommend using the latter. I stumbled upon some problems during installation of fastlane plugins after using `brew` to install fastlane.

To integrate the tool with our project, we should open its directory in terminal and type:

It will start a very intuitive creator that guides us through the process of setting up fastlane for our project. After this process is finished, we have configured it. Now we can customize and create new lanes.
Fastlane lanes are written in Ruby. Even if you are unfamiliar with this programming language, learning the basics that are needed to configure it shouldn’t take too long. There is also a version of fastlane that supports Swift. However, it is still in beta.

The tool provides a few ways of handling code signing e.g. „cert” and „sigh” or „match”. However, if you plan to use fastlane mainly on CI/CD server you can rely on automatic code by signing in Xcode and installing the certificates manually on that machine. In that case you don’t need to use any of those actions in your lanes.

Error blockerror do |lane, exception| is very useful for error notifications. For example, you can post message to Slack when lane executed by the CI server failed.