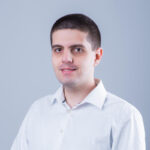 Back in the pre-storyboard era of iOS development, developers had to write hundreds of lines of boilerplate code that served to manage UIViewController object hierarchies. Back then, some were inventing generic approaches to the configuring of controllers and transitions between them. Others were just satisfied with the ad-hoc view controller creation and presented them directly from other code controllers. But things changed when Apple introduced storyboards in iOS 5. It was a huge step forward in the UI design for iOS. Storyboards introduced an ability to visually define app screens and – what is the most important – transitions between them (called segues) in a single file. Storyboard segues allow to discard all the boilerplate code related to transitions between view controllers.

Problems With The View Controller Configuration

Let’s start from some basics. In Objective-C/Swift, in order to give an object an initial state, the initializer (init()) is called. This call assigns values to properties of the class. It always happens at the point where the object is created. When subclassing any class, we may provide the initializer and this is the only proper way. We may also provide such initializer for the UIViewController subclass. However, in case such controller is created/presented using the storyboard, the segue creation takes place through a particular initializer – init(coder:). Overriding it in subclass may give us the ability to initialize properties added by the subclass. However, we don’t have the ability to pass additional arguments to the overridden method. Moreover, even if we had such an ability, it would make no sense. This is because for storyboard-driven view controllers there is no particular point in code which allows them to pass data to the initializer. That is, we cannot catch the moment of creation of such controller. The creation of view controllers managed by storyboard segues is hidden from the programmer. It happens when segue to the controller is triggered – either entirely handled by the system (when triggering action is set up in the storyboard file) or using performSegue() method.

Apple, however, provides a place where we can pass some data to an already created view controller after the segue is triggered. It’s a prepare(for : sender:) method. From its first parameter (of UIStoryboardSegue type), we can get the segue’s destination view controller. Because the controller has already been created (initialization is already performed when triggering segue) the only option for passing the required data is to configure it. This means that after the initialization, but before the prepare(for : sender:) is called, the properties of the controller that hold such data should not have initial value or should have fake ones. While the second option is meaningless in most cases, the first one is widely used. Such absence of data means that the corresponding controller’s properties should be of an optional type(s). Let’s take a look on the following sample:

This is how the view controller configuring is implemented in most cases when dealing with segues:

In case all conditions are satisfied we can set values to the properties of the controller that need to be configured. The problem with the approach is that it has too much service code related to verification and data extraction. It may not be visible in simple cases like the one shown above. However, taking into account the fact that each view controller in application often has transitions to several other view controllers such service code becomes a real boilerplate code we’d like to avoid. Take a look at the following example that generalizes the problem with prepare(for : sender:) implementation.

Let’s try to find the approach to the view controller configuration that may eliminate the outlined problems. We’re limited to the usage of prepare(for : sender:) since it’s the only point where the configuration can be done. So we cannot do anything with the type of the destination view controller and with the check of segue identifier. Instead we’d like to generalize the process of configuration in a way that allows us to have a single type check and single verification for identifier. That is, check with some generalized type of destination view controller and variable segue identifier rather than enumerating all the possible concrete types/identifiers. For this, we need to pass somehow the information about the type and the segue identifier to the prepare(for : sender:) method. We would like to have something like the following:

In order to provide a unified configuration interface we may implement a method for configuring each controller. We should pass there the values that will be assigned to the corresponding controller properties. To unify such method, every configured controller should have the same signature. To achieve this, we should wrap a set of passed configuring values into a single object. Then such method will always have one argument – no matter how many properties should be set. The type of the argument is a type of the wrapping object and is different for each view controller. This means that the view controller should implement a method for configuring and somehow define a type of the argument of the method. This is a perfect task for protocols with associated types. Let’s define the following protocol:

Now, let’s go back to the controller that is triggering a segue. We’re going to use the configuration protocol we’ve defined. For this, we need to have data for passing it to the configure(with:) method. This should be something as follows:

On the other hand, just returning the configuration of a concrete type per each segue id is not enough. If we did so, we would need to pass it somehow to a destination controller that has a type UIViewCotroller. It has nothing to do with the configuration. On the other hand, we cannot use the Configurable protocol as a type of an object directly because it has an associated type constraint. That is, we cannot cast the destination view controller to the Configurable type like as follows:
(segue.destination as? Configurable)?.configure(with: data). Instead, we need to use some proxy generic type that is constrained to being a Configurable.

Also, creating all the configuration objects for the controllers in a single method has no sense since it brings the same issue as the one with prepare(for ). That is, in this case we have a concentration of code intended to configuring different objects in a single method. Instead, the better solution is to group the code for creating the particular configuration and the type of the controller which is configured into a separate object. Consider the following example:

In the code above, a single Configurator<T> instance is responsible for configuring the controller of a particular type. The code that creates the configuration is injected to the configurator in the init() method during creation.

According with the reasoning given above, we should associate a segue ID with the particular configuration and type. Considering the approach with the Configurator<T>, the easiest way to do it is to create a mapping object where the key is a segue ID and a value is the corresponding Configurator<T> instance. We may also create those Configurator<T> objects in place of the map definition. This will make the code more clear and readable. The following example demonstrates such map:

Let’s now try to use the configuration from the dictionary above in prepare(for ) method. Let’s take a look at the following example

For this, let’s create a protocol Configuring and modify the Configurator<T> type to make it conform to it. The example below demonstrates the refined approach.

Now, the performConfiguration(of:) is a generic method. This allows us to call it without knowing the exact type of the object which is configured. The method however became throwable. This is because the type of its argument is widened so that the arbitrary type can be passed. But the method can still handle only the objects that conform to the Configurable protocol. And if the passed object is not Configurable we don’t have anything to do with it. In this case we throw an error.

We may now use the newly defined Configuring protocol to define the dictionary for segue-to-configurator mapping:

This allows us to use the Configuring objects inside the prepare(for ) method as shown below:

The above prepare(for ) implementation is the same for any controller that is going to use the described approach. There are several ways to avoid such code duplication. But you must keep in mind that each has its downsides.
The first and the most obvious way is to use some base view controller across the project that will implement the method prepare(for ) and the segueIDToConfigurator property for holding configurations:

The second way is to use a special protocol that defines the interface of the controller that can configure other controllers. Consider the following example:

This way is more flexible in comparison to the first one. The protocol can be implemented by any object that is going to configure the segue destination controller. It means that not only UIViewController subclass can use it. Moreover, it doesn’t limit us to use only the BaseViewController as a superclass. On the other hand, each view controller still needs to override prepare(for ) and call configure(segue:) method in its implementation.

In this article, I described the approach to configuring destination view controllers with clean and straightforward code when using storyboard segues. The approach is possible thanks to useful Swift concepts, such as Generics and Protocols with associated types. The code is also safe as it uses static typing wherever possible and handles errors. Meanwhile the dynamic types are concentrated in single place and the possible errors are handled only there. This approach allows us to avoid unnecessary boilerplate code in the prepare(for ) methods. On the other hand, it makes configuring particular view controllers clearer and more robust by using a specific Configurable protocol.