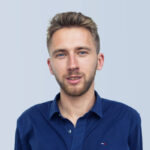 Let’s finish up the process of building our AWS infrastructure and discover the last crucial elements of the AWS Cloud needed for our highly available, secure and fault-tolerant cloud system.

This article is the third and the last one of the mini-series which walks you through the process of creating an enterprise-level AWS infrastructure and explains concepts and components of the Amazon Web Services platform. In the previous parts, we created the VPC, subnets, NAT gateways, configured network routing, set up required EC2 instances, bastions hosts, and the RDS database. If you have missed any of the previous parts, we strongly encourage you to check them out.

In this article, we will finish up the infrastructure, by setting up a load balancer, target groups, and deploying our applications on our platform.

The whole series comprises of:

Let’s remind ourselves of what we are building throughout this series. The goal is to create a real-life, enterprise-level AWS infrastructure that will host a user management system consisting of a React.js web application, Java Spring Boot server, and a relational database. We have already built the major part of the architecture in the previous articles. Hence, we already have in place a VPC with four subnets (2 public and 2 private) distributed across two different availability zones.

In public subnets, we have EC2 instances ready for our client applications, NAT gateways, and bastion hosts. At the same time, our private subnets contain EC2 instances for the backend servers and the RDS databases. The only element that is missing is the Load Balancer. Therefore, in this part of the series, we will set it up. In the end, we will have a ready platform with backend servers and frontend applications running on it.

Below you can find the view of the user management web application system hosted on AWS.

The applications can be found on Github.

Now, let’s dive into some theory!

Load balancing is the process of efficient incoming traffic distribution across all of the request targets (servers, application instances, databases, etc.). A load balancer is placed in front of your infrastructure and routes incoming client requests across all components able to handle those requests. This minimizes latency and ensures that no targets are overloaded, increasing the overall performance of the system.

Elastic Load Balancer automatically distributes incoming requests across multiple targets such as EC2 instances, containers, IP addresses, and lambda functions, defined in a target group. Target groups allow you to define a set of targets that are supposed to handle the same type of traffic. Each ELB has a set of listener rules that consist of request conditions and a target group to which the requests fulfilling those conditions are supposed to be routed. You can create different target groups for different types of requests, for instance one target group for client application requests and another for the backend server requests.

ELB also facilitates operational monitoring of your system, through integration with CloudWatch and X-Ray AWS services, as well as central certificate management.

There are three types of ELB:

What kind of benefits does ELB provide?

Let’s start the configuration of the load balancer by setting up the required target groups. Go into the EC2 service dashboard, and in the left menu bar find the Load Balancing submenu. Go into the Target Groups section, click Create target group, set the target group name, select Target type as Instance, and set a port to 5000 ( this is the port our client application will be listening on). Associate the target group with our user-manager-vpc.

After creation, go to the Targets tab and click Edit. Add client-a and client-b EC2s as target instances and save.

Next, create another target group for our server instances, and add server-a and server-b EC2s as its targets. Change the health check path to /users (our server does not expose / endpoint).

Configure the Load Balancer’s security group in order to allow incoming traffic from everywhere on ports our applications will be running on.

In order to facilitate the deployment of our applications, I prepared deployment scripts that will automatically deploy our applications to the platform. You can find them in the GitHub repositories in the base directories of the projects in the deploy.sh files. I believe the scripts are pretty self-explanatory, so we won’t walk through them in detail.

You need to run 4 script executions in total: 2 for the server instances and 2 for the client application instances.

An exemplary execution of the script:

An exemplary execution of the script:

Hats off to you! Throughout this series we have created from scratch a highly available, secure, and fault-tolerant cloud system on AWS. Our infrastructure is now ready, and our applications are up and running. Moreover, we have covered an outstanding amount of theory, and even though there is of course much more to AWS than that, we hope this series provided you with a solid ground for a deeper dive into the waters of cloud computing and the Amazon Web Services platform.