3 Questions to Michał Darkowski, Project Manager at Grape Up 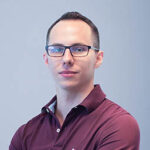 So you’re a new project manager, now what? Michał Darkowski, Project Manager at Grape Up gives some valuable insights that will help you nail it at project management. Since he joined the company in 2013, he has led a variety of projects implemented in multiple technologies, with a team ranging from 1 to more than 15 members in size. In addition to that, Michał has a solid software development background.

1. What are the 3 questions that every project manager should ask their team most often and why?

Michał: The first one would be, “What’s slowing us down?”. You will be surprised how much insight you can get from an answer to this. First of all, you will learn what needs to be changed to make it possible to deliver faster – which is very important in today’s fast-paced IT industry. You will also learn what impacts your team’s productivity and affects their morale. Perhaps something can be automated? Maybe the team is doing something that doesn’t bring any value? Maybe there’s something that you’re doing as the PM, that you shouldn’t do? I think that every project manager should strive to make their team as efficient as possible on a daily basis and this question gives space for that.

The second question is, “What would it look like if it was easy?”. Ever since I read this in a book by Tim Ferriss it became one of my favorite questions. We often think that complicated problems require even more complicated solutions. This question completely changes the perspective and matches perfectly the KISS principle (keep it simple, stupid) which I’m a huge fan of. Whenever someone in your project team is stuck with a challenging problem, asking this can help re-frame their thinking and get the answer they are looking for.

And last but not least, the simple, yet so powerful, “How are you?”. It is important to know the atmosphere in the team and get along well with all members. A little chit-chat in the kitchen can only do good things for your relationship with the team and also have a positive impact on your project.

2. What was the biggest problem you encountered as a PM and how did you overcome it?

Michał: Some time ago my team took over a significant part of an in-development application from an internal team after one of our customers.
The problem was pretty complex. We got a codebase without the documentation and a terribly confusing API. We didn’t know how many of the requirements have already been covered by the existing code. The requirements themselves were poorly defined. In fact, it was more of a bunch of ideas and keywords rather than a list of proper product requirements that developers can follow. To make matters worse – the team which has previously worked on this project was no longer around.
How did I overcome it? Long story short, by problem decomposition and teamwork.
Once we gathered all the questions and unknowns, we were able to clearly understand why our situation is difficult. The next step was to invole the entire team in gathering all the answers.
Which requirements are already covered? Well, let’s try to use the application ourselves and see what happens. Ambiguous acceptance criteria? Let’s properly define it and consult with the customer to ensure that this is indeed what the product should do.
API issues? Let’s successively clean them up, one piece at a time.
Of course, all this was a huge effort for each team member and it took plenty of time, but seeing improvement every single day was very motivating.
Thinking about it today I’m very proud of what we have achieved and how significantly the project changed since day one.

In my opinion, the approach to all problems consists of four simple steps.

Keep it in mind the next time you feel overwhelmed and believe that you’re facing a dead-end situation.

3. What’s the most useful tool you have discovered in the last 6 months?

Michał: That would be Evernote. We all take notes, don’t we? Doing it efficiently and keeping all your notes organized is a very important, yet downplayed need. With Evernote, which as you already guessed, is a note taking app, it is fun and very simple. I can for sure say that it took my note-taking to a new level. On a side note, this blog post isn’t sponsored! From rich formatting, to attaching files, and inserting images that can be easily annotated, or saving interesting web pages with just two clicks – it’s all there!

To be honest, I tried Evernote for the first time in 2016 and was a little bit disappointed with the tool and at the same time surprised that so many people recommended it. I have given it a second chance recently and I don’t regret it. Going all-in was the crucial part, I moved there all txt and docx files from my Dropbox, all screenshots with some important information from my phone and also imported pictures of my last paper notebook. Finally, I have everything in one place, and with Evernote’s powerful search tool I can find it in no time. This month I even got to convince a few of my colleagues to use it!